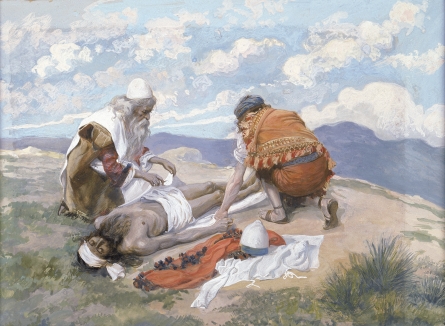 As I mentioned last week, this podcast will be very short. Between work, my other project and Pesach there simply isn’t time for an extended podcast.

That said, there is time for a podcast.

Rather than digging into technical details and their symbolism – as I’ve done the past few weeks – I want to concentrate on a single theme. The role of the Kohen, the priest.

We often imagine the Kohen, especially the Kohen Gadol (the high priest) as exalted and honored. And they were. But there was another trend in effect. While they were exalted, they were also deeply, deeply, constrained. We see it throughout the Chumash. They shave all their hair, erasing one of the most prominent ways of expressing individuality. Unlike prophets, they pass on their positions from fathers to sons – as if their personal characteristics were irrelevant. When Aaron dies, his son takes over his position. How? Aaron simply takes off his clothes and passes them on. The clothes, the uniform, make the man. And, as we’ve covered before, the Kohen Gadol wears the ephod – carrying the symbolic relationship between G-d and the people on his shoulders

We see a particular emphasis on this concept in this week’s reading.

Later on, when we see the Aaron’s sons dressed, the Torah uses an unusual word, Chavash, to describe the placement of headdresses on them. The word Chavash is used for a saddle. The Kohanim are being saddled with prominence. They aren’t riding the people, the people – and Hashem – are riding them.

I have an education in Finance. I find this relationship expressed beautifully later in the Torah in financial terms. In Parshat Korach, after telling us that Leviim have no money-earning land of their own, the Torah describes the people paying tax to Hashem. The Leviim can then be paid by Hashem. The secular effect would seem to be identical – the Leviim don’t earn money directly. Instead, they get money from the people. But the spiritual meaning is very very different. The people aren’t paying the Leviim to represent them before G-d. Instead, the people dedicate their resources to Hashem and Hashem is paying the Leviim to represent Him or Herself to the people. The Leviim may be leaders, but first and foremost they are servants.

If I may step into contemporary politics for a bit… this idea is a keen reminder that it isn’t just money that counts, but how you get it. In today’s politics, inequality is a major theme. A recent editorial in the WSJ pointed out that income inequality has been rising, but once you factor in taxes and transfer payments like welfare and Medicare, inequality has actually fallen slightly in the past 50 years. So, which side is right? Is inequality rising or falling? I think both sides are wrong. You see, that same editorial pointed out that the bottom quintile of Americans now receive 90% of their income from transfer payments. They don’t earn it, they are simply given it.

Some seem to think that all that matters is what resources you have. But the Kohanim remind us that it also matters how you get those resources. The bank accounts may be end up the same either way, but if 90% of your resources come from government payments unconnected to your efforts then your life, and self-regard, will be very different than if 90% come from your own earnings. Put another way: earned income inequality matters when it comes to raising people up. I would argue that once you have your most basic needs addressed, earned income inequality matters more than resource inequality.

Let’s bring this back to the Parsha. The Kohanim don’t simply get to tax the people. They aren’t masters. If they consider their earnings in this way, then they will be corrupted by them. They won’t have earned the money. They’ll just collect it. Instead, they must remember that they work for G-d – supporting His or Her relationship with the people. They are there to serve, not to rule.

The accounting, the clothes and the Chavash (the act of saddling with prominence), all reinforce this.

They earn their money through service – they do not collect it simply because they are descended from Aaron brother of Moshe.

These ideas don’t stop with the Kohanim alone.

At the most basic level, this means we are here to represent G-d and not ourselves.

We are prominent, but our prominence should focus on our service to Hashem and His or Her relationship with humankind.

We should look at the resources we have – whether we are wealthy or not – as a salary from heaven meant to be used to support our greater mission. This greater mission is not just our own connection to G-d, but other’s connection as well.

As we step into Pesach we reflect on our transition from slavery to freedom. From Avdut to Chairut. The funny thing is, almost as soon as we are freed from Avodah to the Egyptians we are commanded to be Avadim of Hashem. We translate Avadim as ‘slaves’ when dealing with Egypt, but ‘servants’ when dealing with Hashem.

Interestingly, Islam handles these same words a little differently. A common phrase is translated as “O Allah, I am your slave, son of your male slave and son of Your female slave…” I’m no Arabic specialist, but reading the transliterations and looking at translations of slave on Google, the shoresh of the word for slave seems to be Abd. The name Abdallah means Servant of G-d. Given that our bet can be pronounced with a ‘b’ or a ‘v’, it seems to be same shoresh as Avod; our word for service and slavery. The Islamic translation is consistent when they call themselves slaves of G-d.

So, are we going out from slavery to Egypt and simply becoming slaves to Hashem? Has there been any change in our actual position? In a way, the answer is no. We were saddled by the Egyptians. As I discussed in Parshat Beshalach, the horse they rode was killed in the crossing of the Sea. We were that horse. We became free men. But now our Kohanim – a microcosm of our purpose as a people – are being saddled in service of G-d.

In the other case we serve the Almighty and the Everlasting. We serve that which is greater than ourselves and lasts from the beginning until the end.

In one case, we exist and we vanish.

In the other, we become a part of forever.

We are not worthy objects of our own service. We know we are meant for something greater than self-enslavement.

When we serve the Almighty and Everlasting, we can be lifted up.

In this way, the saddle of divine service is something more than freedom. It is purpose. It raises us up.

On Pesach, we use the phrase from Avdut to Chairut and translate it as “from slavery to freedom.” But Chairut is only used once in the Chumash – when Hashem engraves the tablets of stone with His finger.

At the end of this Torah reading, the Torah records that Aaron and his sons stayed at the door of the Tent of Meeting for seven days. They can stand for seven days. They are freed from fatigue, and even the need to dispose of natural waste. They are set apart, and raised up, because they have been saddled with their service.

So, in the coming year, if we find ourselves being granted honor, wealth, peace or love we must remember to use these blessings in the service of something greater.

Only then can we be lifted up.

Only then can we serve our true purpose.

Only then can we lift the world – building a bridge between the infinite and that which rises from – and ultimately returns to – dust.