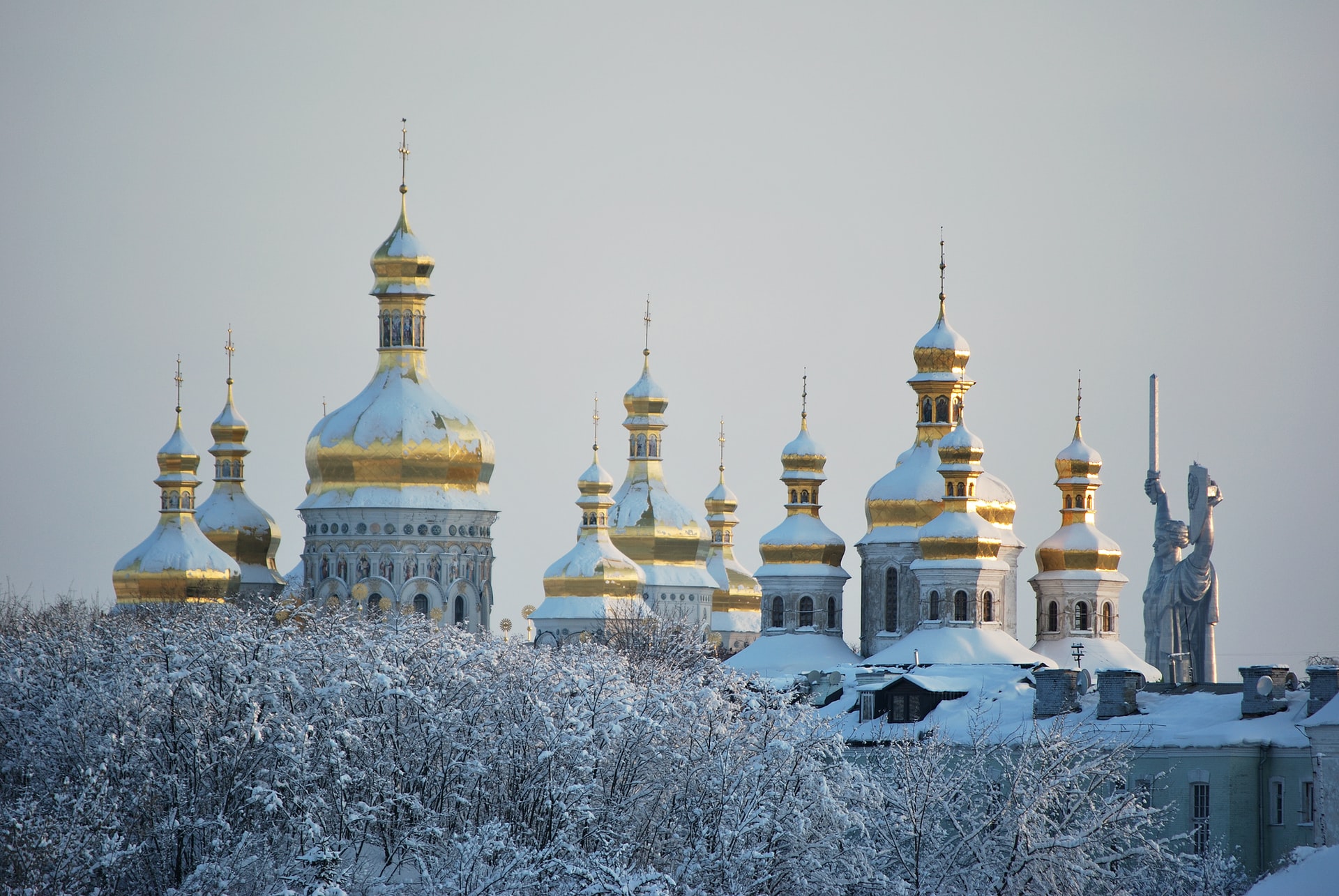 Purim, Vayikra & Ukraine: the future is ours to determine

In an effort to better understand Putin’s defense of the conflict in Ukraine, I came across various Russian TV maps of Ukraine. In those maps, Ukraine was carved up like cuts of meat… This part is Russian, but granted to Ukraine by Stalin, that part is Russian, but was granted to Ukraine by Czar someone or another… and this little section – right in the middle – is the only part that is the ‘real’ Ukraine.

The rest of the modern nation-state of Ukraine, populated by many Russian-speaking and ethnic-Russian people, is Russian. From the Putinist perspective, it is historical destiny that this place be brought under a singular Russian political identity – and that the Ukrainians shift towards their true place… ‘Little Russians’.

If the Russian-speaking people of Ukraine bought into this perspective, it would indeed be a reality. It would be a reasonable position to take. But the reaction in Ukraine to the Russian invasion, a reaction that crosses ethnic lines, is clearly speaking to another truth.

The country of Ukraine now has its own multi-ethnic identity and polity – although both might be very new indeed.

This Thursday and Friday were the beginning of the Jewish month of Adar. This is a month of Jewish celebration centering on the festival of Purim. Also, next Shabbat we start a new book in the Torah, the Book of Vayikra (or Leviticus). Amazingly, both can help us understand the reality we are seeing unfold all around us.

Near the beginning of Megillat Esther, we are introduced to two of the major characters: Mordechai and Esther. Mordechai’s lineage is laid out and it shows a tremendously relevant pattern. Mordechai’s forebears have Judean names. Mordechai, however, has a name that is only half Judean. ‘Chai’ means ‘Life.’ But Mordec is actually Marduk, a highly prominent Babylonian god. He was the equivalent of the Greek Apollo – or perhaps Zeus. The famous Cyrus Cylinder describes Cyrus the Great as having been chosen by Marduk.

And what about Esther? Esther is named after Astarte, the goddess of sex.

What we see through these names is that, even in the core of the community, Jewish identity is disappearing. We are being named after the gods of others. The appearance of the genocidal Haman prevents the erasure of the Jewish community. We only survived because we were threatened with an externally driven destruction.

If we shift to Ukraine, we can see something very similar. As we watch what is happening in Ukraine, we don’t have to pretend that Ukraine was a perfect place with perfect unity. Prior to 2014, it was indeed deeply fractured. Polls showed that a majority in the east wanted to be a part of Russia. Eight years later, before the current war, that reality had shifted, somewhat. Because of the external Russian threat, and Russian performance in the Donbas, a transethnic Ukrainian identity had begun to be established. That Ukrainian project was far an ideal democracy, though. In the name of protecting against Russian incursions, prominent pro-Russian TV stations had been shuttered. A leading politician (and friend of Putin) had been arrested. In addition, Zelensky had largely failed in his efforts to address corruption. Ukraine’s society suffers from anti-semitism and racism – although less than many of its neighbors.

Given all this, the maps shown on Russian TV seemed to describe at least a shadow of reality. Just before the war started, I read deeply informed and educated analyses which argued that an insurgency could not be maintained because (among other things) the Ukrainian government lacked the clear support of the people. Ethnic Russians in Ukraine were much more Mordoc than Chai.

Fewer than 10 days later, that reality has changed. In the last 10 days, the reality of Ukraine has fundamentally changed. Faced with their Haman, Vladimir Putin, the Ukrainians – of all ethnic stripes – have become Ukrainian. Today, it is a country whose people are willing to die for their right to determine their own fate and their own collective path. We are witnessing the birth of a nation – a Mamlechet (a governed Kingdom) that is more than just a Goi (a somewhat formless ethnic identity).

Impressive as it is, the story is greater still.

In Parshat Vayikra (the beginning of the book of Leviticus), we catalog a broad class of actions of seeming destruction. People bring offerings and we slaughter and burn them. We not only burn offerings, we burn and destroy flour and oil. It seems to be a tremendously destructive Torah reading. Although the entire Mishkan probably went through fewer animals than a typical McDonalds, our modern eyes join with many ancient eyes in being fundamentally bothered by the waste of these animal sacrifices. Remember, many other societies that practiced animal sacrifice ate their offerings. Animal sacrifice was often a barbeque in the name of the gods. But we destroyed, we burned at least some part of our offerings. For that reason, the Torah portion of Vayikra doesn’t call the offerings Kadosh (or Holy). The only Holy offering in this reading is that of the flour that the Kohen eats. Only it does not have the taint of destruction.

But in the week after Vayikra, the Torah reading of Tzav, the situation is entirely different. In Tzav, which is cast from the Kohens’ (or Priests’) perspective, these same offerings are almost all Holy. In the next reading, from the Kohens’ perspective, we can see the same destruction and recognize that it connects us to something far greater than ourselves – and far greater than what is destroyed. It is as if the physical lives of the animals have been dedicated to their highest possible purpose – Kodesh Kedoshim, Holy of Holies – and so there is no waste.

There is an order here, though. The offerings do not start off Holy. It is only after we pass through the destruction of Vayikra, that we can also appreciate the holiness that can be seen in Tzav.

The destruction and death in Ukraine may well represent the same sort of process. The costs are tremendous. We see destruction and death. Not only of Ukrainians, but of Russians. I read the transcript of a terrible phone call between mothers from a small Russian town. Their local tank brigade had been eliminated. Of 150 boys from that town, only 18 survived. It was like that terrible vignette of Siserah’s mother – waiting for her son to return from war.

What we see now is death and destruction. Perhaps, though, it is something like Vayikra: a process of sacrifice in which we cannot yet see the timelessness that is being created.

But, if we will it, the reading of Tzav can come to be.

If Putin were to meet a sudden end today, the new dawn would not be a perfect one. Ukraine is far from a perfect country and neither is Russia. But a new consciousness would come into existence – and not just in Ukraine. Yes, Ukrainians are forging their own national identity as a self-determined state. But the shockwaves of the Ukrainian sacrifice are changing reality far beyond the nation’s own borders. Peoples from Germany to the United States to Thailand are discovering the value of freedom and self-determination as concepts – even when applied to people other than themselves. How else can we explain the outpouring of support and the 14,000 recruits to the Ukrainian foreign legion?

The importance of a free nation, and of a nation of freedom, is being rebirthed. Not just in Ukraine, but globally. The world is being united against the forces of tyranny. A West that has grown increasingly small-minded in its concerns – and admiring of totalitarian controls – is suddenly recognizing the great value of freedom. Even Russians and Belarussians are beginning to demand their own self-determination.

The sacrifice is, perhaps, leading to something greater. Something timeless and deeply valuable.

The sacrifice of Vayikra is, perhaps, yielding to the Holiness of Tzav.

And the threat of authoritarianism is, perhaps, yielding to the promise of freedom.

However, this progression is far from a foregone conclusion. People compare Putin to Hitler, which is ridiculous. Zelensky accuses the Russians of genocide, which is ridiculous. Looters and vaguely defined traitors are being promised life in prison. Ukrainian state authorities are promising Russian artillery men summary execution. Judging from the relatively low levels of civilian death (given the amount of hardware being brought to bear on cities) this sentence should be seen as deeply problematic. And familiar to those of us in Israel.

In fact, the process we are seeing may well birth, another, darker, reality. Not of a nation of self-determination but of a nation of hate. And not of freedom, but of subjugation in the name of self-preservation.

The paths are so close to one another. They can at times seem indistinguishable. But it is up to us to clarify their distinctions and choose the path of holiness and light.

If we can do that – if we rally around the flag of Ukraine as a flag of freedom – then we can redefine for ourselves what is means to be an American, an Israeli, a Russian or a Jew.

So, by all means: offer your charity, shout out against the evil we see, and spread the wings of kindness. But always keep in mind what is coming next. Our sacrifices must be in the service of freedom and the realization of human meaning and purpose. If they are not, then their seeds will not be holiness – but bitterness, hate and unending violence.

Photo by Ganna Aibetova on Unsplash