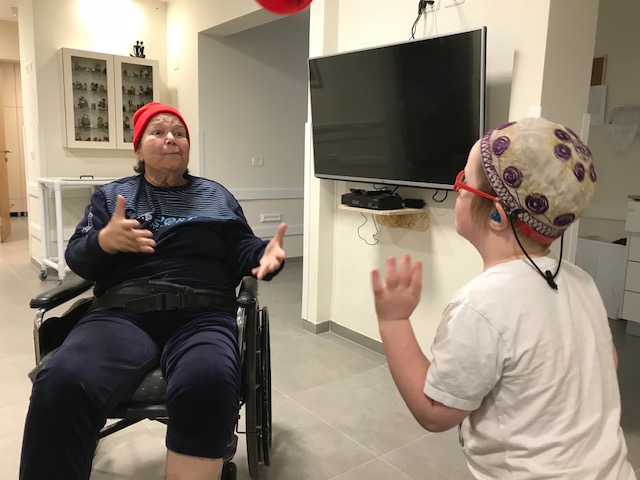 Avraham’s birth wasn’t described, neither was Yitzchak’s – but Yaacov’s was. Yaacov grasped the heel of his brother, struggling for supremacy from the very beginning of life. Yaacov’s life wasn’t defined by his birth, but it was framed by it. My aunt Nina Berniker was both much the same and very different.

Nina’s mother, my grandmother, was hemorrhaging before Nina’s birth. My four-year-old mother found her own mother with blood all over the upstairs bathroom. Moments later my grandfather carried his wife down the stairs and out to the car – covered in blood. Nina was delivered by forceps birth. Her skull was crushed. Her brain was damaged due to oxygen deprivation. And her spine was broken. In later tellings, I heard of a doctor who was incompetent – but was kept on because he had good bedside manner and was a member of the Movement. In other words, the doctor was a good Communist – which excused his incompetence as an actual doctor.

As my mother told the story, Nina was expected to accomplish nothing. So much damage had been done to her, because she wasn’t expected to live. Of course, speaking, reading and writing would be beyond her. Perhaps she would never even walk. But her own mother – my grandmother Nellie who died 13 years before I was born – rejected the prognostications. Nina learned to speak, to read and write.

She walked and talked just fine, thank you.

When I first brought Rebecca (my wife) to meet her, we drove north to Kfar Tikva (the Village of Hope) . It was a regular pilgrimage for any family members visiting Israel. I explained what had happened to Nina. I explained who she was. And then Rebecca met her. Nina shared mannerisms with my mother, from the way they moved their eyes to the way they rubbed their hands. It was like they were shadows of one another. Rebecca and Nina spoke. Afterwards I asked Rebecca what she’d thought. Rebecca replied with a simple truth: “She’d be perfectly normal, if she hadn’t been born a Berniker.”

Born into my grandfather’s family – a family that had genetically bred for intelligence and nothing else for at least a thousand years – she was considered not only retarded but less than fully human. But even with all the brain damage she suffered, she was actually quite ordinary. Even after all the damage her IQ of 80 was a full ten points higher than my own father’s. And while she was lacking in many quantifiable forms of intelligence, Nina had a deep and fundamental wisdom.

She also had the talent of my grandmother’s family. My own mother died without ever working up the koach to tell her own sister she was dying. She could not communicate for weeks before her death. We didn’t tell Nina my mother had died until about three weeks after her death. We waited until somebody could tell her in person. Shoshana Bianco, a family friend, went up to visit her and inform her. Before Shoshana could say anything, Nina cut her off. Nina knew why Shoshana was there. According to Nina, two weeks earlier – after my mother had died – Nina had received a phone call. It was my mother, telling her than her time had come.

The visits from the recently dead are family trait – not of the Litvak Rabbis of my grandfather’s family – but of the wise women of my grandmother’s family.

Nina was wise, in her way. As part of that wisdom, she was perfectly aware of what she was missing. She had done so much to overcome it. She had married an assembly line worker. She had had a daughter. She had held a job. She’d had a house. Her greatest problem was that she’d simply been gifted with the genes of her father’s family; and cursed by the very focus on what those genes had granted her.

When my grandfather came to Israel in the early 80s, he gave her an ultimatum: leave her family and her life or be disowned. Put more politely: leave your family and I will provide for you for the rest of your life. Somehow, Nina’s own father couldn’t allow her to be ordinary; perhaps he saw her as a burden on her own husband and child. Nina left her family. She left her life. And she settled in kfar Tikva – a village established by the Germans after World War II as a home for disabled Jews. Like all the other ‘retarded’ residents of kfar Tikva, she spoke three languages. Everybody spoke three languages; it was the only way they could form a community out of people from so many backgrounds.

With kfar Tikva, Nina gave up control over her own life. Like Yaacov allowing Yosef to bundle him into a wagon – to dictate where and how he would travel – Nina surrendered. But she did not totally surrender. Her life was not that of a basket case. She worked on a factory line kfar Tikva had – they made the little floating wicks that are so popular today. She was proud of her work – of her creations. And she still travelled some. She came to visit my family in London and managed to give my waiting sister the slip at Heathrow. She could get to Golders Green and the flat all by herself, thank you very much. She loved thumbing her nose at the limits her world placed on her. My father would routinely ‘break her out’ of kfar Tikva. As the staff gave pro-forma objections, they would tear off down the road to head out for glida (ice cream) in Tivon. She would laugh with joy. And later, when she couldn’t leave, she’d take pleasure in the ‘off-limits’ food we brought to her. Pizza was a favorite.

Kfar Tikva ended up taking wonderful care of her as she grew older. With family representatives (thank you Moshe and Shoshana) helping to oversee her affairs, she grew old in that stunningly beautiful place. She surrounded herself with friends. Friendships built and reinforced over decades. Everybody at kfar Tikva knew Nina. She was a light to all who surrounded her. She was always happy and they were too. It is hard to visit now (with Covid) but it has become a beautiful place.

In the end, I played a role in making her choices for her. She had cancer. I decided not to have her formally diagnosed. The process would have been hard and the benefits limited. Ninahated hospitals and needles and medications. She hated sickness. We might have extended her life by a few miserable months, but that was it. I – in consultation with my family – decided to simply not tell her that she was dying. She knew she was dying; she wasn’t stupid. But she was happy nonetheless with the life she’d lived.

Like my own mother, Nina struggled with her weight. I remember her delight, about a year ago, when she declared that she’d lost so much weight. She was so happy about it. I did not tell her why she had dropped so many pounds. Nonetheless, I suspect she knew was taking joy in little more than a silver lining.

Last Thursday my brother, who came into Israel for the Bar Mitzvah, came to visit her. He showed her pictures of his granddaughter – named after our mother. Perhaps that was when Nina decided she’d had enough of this world. Her best friend passed in January. Her sister was gone – with grandchildren named after her. The baton had passed. Within days, Nina precipitously declined. I visited her on Wednesday. For the second time in my life, I did a deathbed vidui. I zoomed with her daughter and her brother. I like to believe that on that call she learned she had two great-grandchildren: Bella and Ezra (with a third on the way).

A few hours after I left, Nina Berniker died.

Nina’s life was not defined by her birth – it was framed by it. She overcame so much and she grew to became a blessing to all her knew her. Her days could have been seen, as Yaacov saw his own, as few and bad. But they could be seen in an entirely different way. The way she saw them. As days she could fill with joy.

She is a testament to what blessings we can leave – no matter the challenges.

Despite the words of Hamalach Hagoel, Yaacov was not redeemed from all evil. Neither was Nina.

Yaacov struggled and fought, but managed to leave a seed of a nation.

Nine struggled and fought and left behind simple joy.

Early in Yaacov’s life, he was called Tam – simple. The same word could apply to Nina. Both were simple. And yet both gave us so much more than their simplicity would suggest.

May G-d bless Nina’s neshama and may her example shine for us all.

We use cookies on our website to give you the most relevant experience by remembering your preferences and repeat visits. By clicking “Accept All” or continuning to browse you consent to the use of ALL the cookies. We do not sell your information to third parties although third party media viewers (YouTube, Podbean) do track views through their systems.
Cookie SettingsAccept All
Manage consent