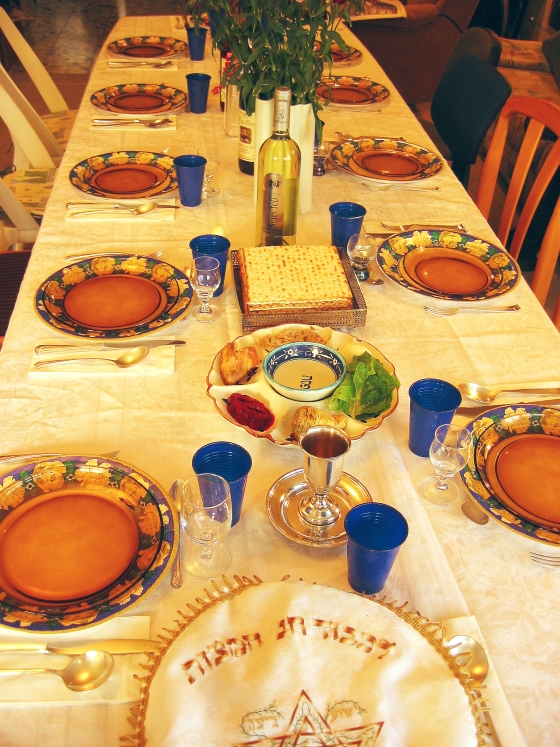 Let’s pretend you’ve woken up after the Seder and you’re in Shul (in Synagogue) and its – let’s say – 8:30, 8:45 in the morning. You’ve just spent up until midnight or 1:00 or even later enjoying the Pesach (Passover) Seder. And you’ve gotten up and you’re asking yourself as you sit in synagogue: “Why am I here?”

That’s the question. You’ve gone from slavery to freedom and now you’re sitting in shul. Early in the morning. Bleary eyed and perhaps wondering, “Why am I here?”

Let’s extend the question. Why did you have a seder? Why do you do all of this stuff? What’s the point of any of it?”

Now there are a couple of standard, regular, normal answers. Right?

For many Jews that’s not the reason.

For many Jews, I suppose, the reason is that the Pesach seder is the most enduring tradition we have. It is the way in which we pass some shred of Judaism from generation to generation and maintain our people in some way. So, you could say “the reason I do this is because of tradition. It is very old. The Jews have been doing this for over 3,000 years. It is one of the oldest traditions in the world.”

Age is not the reason we do this. And the simple commandment from Hashem? I don’t think that’s enough of a reason. Yes, Hashem tells us to do it, but there are reasons built into the entire story.

We put all this work into Passover cleaning. We make our kids stay up late. We make them memorize questions we never answer. We do it all for a reason. But what’s the reason.

If we go back to that first Exodus, the Exodus from Egypt, we know that it involves Pharaoh and Egypt.

And those people, among other things, take whatever women they want.

Everybody else is a snail to them. An ant. A grasshopper.

Those men of might have managed to corrupt their entire society because of their avarice for money, their avarice for power, their avarice for glory and for fame. They end up undermining everything. Hashem looks at this world and He regrets making it. So, he brings a flood. He cleans it all out. But he doesn’t change people. He just gets involved earlier on in the process. And so, instead of men of might completely dominating the world – they still exist –lessons are made of them in order to keep them in their place.  One of the first men of might who emerges – not the first, but one of the first who emerges after the flood – is Pharaoh. In the time of Avraham. He is a bnei elohim, to use the term used before the flood. He is the son of the powerful (we use the words for gods as well). He didn’t make his own power. He inherited it.

Avraham goes to Egypt because of a famine. And Pharaoh takes Sarah. No questions asked. He sees what he wants and he takes it. Because that is what a Pharaoh does. And the Torah says Hashem brought plagues on Pharoah’s household. But it never says the plagues were lifted.

I believe those plagues and the plagues we see in this story are one and the same. Pharaoh is built up to represent the ultimate in human pride. Yosef builds him up to be the owner of all the Egyptian people – the Jews are not the only ones who are enslaved. Pharoah enslaves everybody. And then Pharoah is brought low in the face of Hashem. Through the plagues that show Hashem’s power from the waters below to the heavens above to time itself, Pharaoh is brought low.

So why do we do all of this?

If we look at one mitzvah (one commandment). The ultimate mitzvah in the process of Pesach. The reason we call it Pesach (or ‘Passover’, or ‘hover’ depending on how you translate it) is because we sacrifice a se (a goat or a sheep) and we put its blood on our doorpost.

Now we don’t do this anymore. But what does this sacrifice represent?

The blood we can understand. Blood unifies all the cells in our bodies, and the bodies of all animals.

When you put blood on your doorpost you are saying “I am a part of this new body politic.” We’re defining the cells in this new body called the Jewish people. The Mezuzah does the same thing. You put this words on the door and you create a new body.

Hashem doesn’t kill those people. Why not? Why doesn’t He take the first born of those people who bring the se? The reason is because of the earlier se. When Yitzchak (Isaac) is about to be offered up, when they are about to climb the mountain where Avraham is going to offer him to Hashem. Where Avraham is about to sacrifice his future because he fears G-d – not because he understands. Yitzchak asks “where is the se?” And Avraham says “G-d will provide.”

So ,what’s the difference between us and Pharoah? Why is the Pesach seder so important? Because Pharaoh had no humility in the face of G-d. He did not recognize his place. He believed that as the greatest of men, as the bnei elohim, the ultimate ‘son of the powerful’ he had the right – and perhaps even the obligation – to look beyond whatever spark of divinity might have existed in the least of people. When we dedicate ourselves to Hashem, when we dedicate ourselves to that which is infinite, we are all equalized.

We are all equalized in the face of the infinite.

So that’s why we do it? We are not simply forming a nation through blood (like Ukraine today, perhaps). We are forming a nation whose very existence is supposed to state “we are connected and dedicated to the infinite.”

That’s what we should represent. That’s why we carry out the seder.

We are recreating the experience of dedicating ourselves to the divine and understanding our place before the Holy One Blessed Be He.

Have a wonderful and rewarding Pesach.