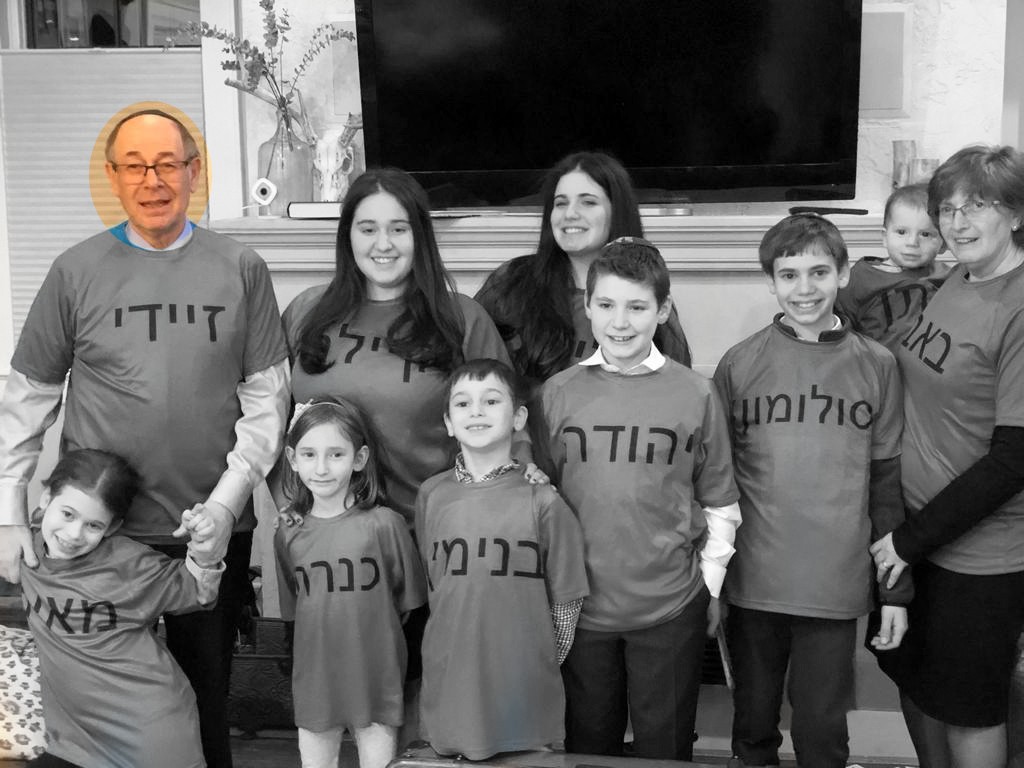 The Spiritual Garden Project cultivates G-dliness in our community through the sharing of our stories.

This is probably going to be the least read profile of the year. We rush through davening on Friday night – we’ve got a Seder to go to! And many of us won’t even wake up for davening in the morning. These poor flyers will just sit on the table, untouched, unread and unloved. That’s a pity, because Thomas Grunstein has a story to tell. You all know Thomas, whether you know it or not. When he is called up to the Torah his Adonii is a dead giveaway that something is different. Thomas is the only man in our community who pronounces the brachot in Hungarian Hebrew.

Unlike so many children of survivors, Thomas Grunstein didn’t grow up in New York or Melbourne or Jerusalem. His family didn’t maintain the old way of reading Hebrew in transplanted, but largely insular, communities. Thomas grew up in Hungary, after the war. And his family remained there. We’ve all met Russian emigres who left in the 1970s and 80s. But they were rarely the children of survivors – much less born right after the war. The Jews of Europe generally had one Exodus: either from Nazi genocide or Soviet oppression. But Thomas Grunstein’s family had two Exoduses. One from the Nazis and one, many years later, from the Soviets.

One Exodus was from utter destruction while the other was from spiritual erasure. One was from Egypt and the other from Lavan.

Before sitting down and writing this, I looked up some statistics. First and foremost, I was curious how many survivors of the camps actually returned to their homes in Central and Eastern Europe. We’ve all met Russian emigres – but they weren’t subject to Nazi ‘governance’, Ghettos and camps. And we’ve all met survivors who returned to Western Europe, or Israel or the U.S. But few survived the camps – less than a quarter million people. And many of those people fled.

But not Thomas Grunstein’s father. He was in a slave labor camp, and he returned to Hungary. His mother, rescued by Raoul Wallenberg, survived in the Ghetto. Her sisters were in the camps but were rescued by the King of Sweden. They returned to Hungary to find any others who survived. Many planned to flee once again. But not the Grunsteins. In fact, many Hungarian Jews returned and then stayed. Under the new Communist Hungarian government, the 20% of Hungarian Jews who survived the Shoah were initially quite influential. Before the war some estimates suggested that 90% of Hungarian industry was owned by Jews. After the war, the remaining 165,000 Jews held important positions in the secret police and were very senior in the Communist administration. This was when Thomas was born – Shabbat Chol Hamoed Pesach, 1949.

In a way, times were good. Thomas’ father was the President of the shul in their small community in Nyirbator – near the Romanian border. It was such a small community, his father would lead the entirety of Yom Kippur davening (I did that once). At three, Thomas was enrolled in cheder where he found himself learning all the wonders of Judaism. On Pesach, he remembers the women placing a metal plate across a large table and then mixing and baking Matzoh. The young boys would carry it down the street to the synagogue. It was an important job, but not one they always did all that well. Thomas remembers that they got to eat it when it broke – and that was apparently quite a treat.

All around the young Thomas, the world had been closing in. By 1951, only 130,000 Jews remained in Hungary. Then the government significantly restricted exit visas. It was suddenly getting very hard to get out. Then, in 1952 and 53, Jews were purged. They found themselves banned from positions of leadership.

Hungary had been a Stalinist client state. The Revolution was Anarchist. It was also deeply antisemitic. Thomas’ mother told of crowds moving through the street the night the revolution started shouting “Itzik, we won’t send you to Aushwitz!”

They weren’t promising not to hurt the Jews, they were promising to kill them where they were.

I actually heard two stories about that night this week. In the first, a Jewish family left almost everything behind, jumped in the back of a truck with a group of other Jews and fled across the border to Austria. They never looked back. Their story was the less common one. 30,000 Jews left during the revolution, but 100,000 remained. Those Jews included Thomas’ family. Thomas’ aunts had worked so hard to return to Hungary, they didn’t want to leave. And they didn’t all have papers. They were worried about being caught if they tried to sneak across the border in the chaos. So, they didn’t leave. Like most Hungarian Jews, they remained. The Soviets rescued them from the Hungarian Revolutionaries.

As Thomas’ mother put it – it was the second time she had been rescued by the Red Army.

Thomas earned a coveted spot for advanced students in Debrecen. Then he went to university in Budapest. Like all university students, he joined the Young Communists. It wasn’t only expected of university students, it was the only way to meet a wife. Assemblies of any other kind were closely monitored and suppressed. Thomas and Aniko (his wife) married in the Iron chupah that still stands behind the largest Orthodox synagogue in Budapest. After graduating with a degree in Chemical Engineering, Thomas entered the workforce.

Life in Hungary had its spiritual struggles. The Soviet government wasn’t as repressive in Hungary as it was in Russia. But it was highly restrictive. Judaism wasn’t erased, but it was practiced quietly. Menorot were lit in the center of houses. Zionism was illegal. The secret police visited once – they knew who he sat with in shul. They knew who all of his friends were. There were spies monitoring everything in the synagogue and the secret police wanted the community to know it. But still, they remained. Some may have wanted to leave, but it was very hard to do so. You could get a passport. But your entire family couldn’t. A husband might get one, but a wife would have hers revoked. Or vice versa. As the state had trained Thomas and his wife, they felt they owned them. They were forbidden from leaving.

And they didn’t feel the need to do so.

And then their oldest son Robi – Pearl Unterman’s oldest brother – came home from school and said, “I know we’re Jewish, but can’t we just have a little Christmas tree?”

That was when they decided they had to go. It was time for their second Exodus.

Thomas, Aniko and Thomas’ brother all applied for passports at the same time. The police interviewed them; the police had even interviewed the neighbors. The Grunsteins claimed they just wanted a ski vacation in Austria – but could they be trusted? To build their case, Thomas and Aniko had repainted and refurbished their apartment before applying for their passports. That’s how the neighbors all knew they weren’t leaving. After all, who would paint if they didn’t intend to stay? The Grunsteins passed the interviews. Miraculously, they were granted simultaneous passports.

The time had come to run.

They picked New Year’s Eve, 1980 to leave with Thomas’s brother who was a doctor in the Hungarian army and their two boys; Robi, aged 7 and Gabi, aged 4. They were hoping the border guards would be drunk. They bought skis and mounted them on the roof for their ski holiday. They don’t even know how to ski. They packed 4 suitcases. And they drove. The border guards were indeed drunk. After a restless night, they found themselves in Vienna. They had one address to go to. Relatives of a friend. But the relatives weren’t home. They drove to the central train station and parked, expecting to sleep in the car. No sooner had they stopped, then there was a knock on the window. Nervous, they opened it. But there was no threat. The man outside was a Jew, from an organization that rescued Hungarians who had fled. He had seen their Hungarian license plates.

They were given food and a place to stay and began the process of emigrating to the United States which included a three month wait in Rome to get their visas.

In the U.S., their Judaism flowered. After a year and a half, Thomas found a job at a circuit board company: ESL Electroscience. Aniko found work in the denture business. They moved to Philadelphia and became rocks of their community there (they even ran a bakery there for over 20 years, because every Jewish community obviously needs a kosher bakery!) Their children went to Jewish schools.

And then, bit by bit, they moved here.

At the end of the interview, I asked Thomas what lesson he would want to share with others. He said that we must pass on the legacy that has been handed to us.  I asked him what his greatest challenge was. He pointed to his family’s escape from Hungary. Finally, I asked him what he learned from that challenge. His answer wasn’t some idea of personal growth and fortitude. No, he said that because of their escape – because of the passports and the man in the train station – he knew that G-d was watching out for them. He was protecting them so they could carry on their people’s legacy.

Hashem had granted them miracles so they could flee their own Egypt. After 40 years in ‘desert’ of Philadelphia – raising a generation who would build lives here – they too came and completed their journey.

If you enjoyed this, you might enjoy some of my other writing. Particularly, A Multi Colored Coat. It explains (among many other things) why I write these profiles.